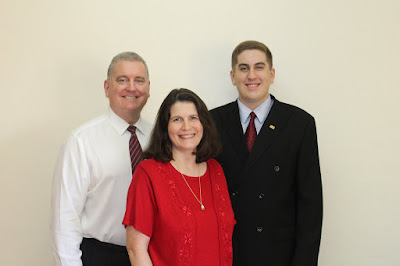 Mark was born and raised in a godly Christian home.  He made a profession of faith as a child but realized at the age of 14 that he was religious but lost, so he accepted Christ as his all sufficient Savior and was baptized two days later.  God immediately called him to preach but he ran from the call for two years.  At the age of 16, he surrendered his life to preach the Gospel.  Two months later, God called him to be a missionary to the country of Brazil.  He graduated from high school in 1978 and attended Baptist Bible College in Springfield, Mo. where he graduated in 1982 with a major in missions and a minor in theology.  He served at the Temple Baptist Church in Powell, Tennessee from 1982 until 1985 during which time he had almost 60 teenagers come to Christ under his ministry and the youth group grow from 30 to over 100.  He became a short term missionary in Kenya, East Africa for one year helping a missionary friend establish youth ministries in Kenyan Baptist churches.  He was able to lead over 80 precious souls to Christ during this time and help in the establishment of two new churches.  After he returned from Africa, he began deputation for Brazil.
While in America during this time, he met Michele McClure as a direct result of his parents’ encouragement.  Knowing it was the direct will of God for both of them, they were married 16 months later. They were approved as missionaries with the Baptist Bible Fellowship in September of 1987. They arrived in Brazil in 1988 and served there until 1991 helping to establish the Calvary Baptist Church of Brasilinha, Brazil with Michele’s parents, Dean and Deloris McClure (Baptist missionaries in Brazil for over 53 years).  God led Mark and Michele back to the States for a brief time and as a result of this time in the States, they were burdened for and called to the former Soviet Republic of Lithuania.  They arrived there in 1993 and labored in the capitol, Vilnius until October 2006 when the Lord moved them to the Algarve Region of Portugal.

Mark completed his master’s degree (May 2006) and PhD (May 2011) in Psychology and Christian Counseling from Louisiana Baptist University.

Michele grew up in Brazil, where her parents, Dean and Deloris McClure,  have been Baptist missionaries since 1965.  She was saved at the age of five, and baptized a few months later.  When she was eleven years old, she attended church camp and there surrendered her life to the Lord to be a missionary.  She attended Baptist Bible College in Springfield, Mo., majoring in Elementary Education.  While in Springfield, she met Mark Hale for the second time.  He had just returned from a year on the mission field.  They were married in June of 1987 and in September of that year, they were approved as missionaries.  Michele completed her master’s degree in Christian Education in May 2012.  She labors together with Mark in the ministry with the children’s and ladies’ ministries, church music, translating materials, preparing teaching materials for the church, and keeping the home.

About their son, Joshua Caleb:


Joshua is the Hale family “miracle”.  After ten years of marriage, they never thought they would have children.  But God greatly blessed Mark and Michele and Joshua Caleb was born in Lithuania.  He is a joy and treasure to his parents.  He was saved at the age of five and surrendered his life to the Lord at the age of twelve.  In August of 2016, God called him to preach. Joshua has been a great help in the ministry, making friends and inviting them to church, helping with evangelization, praying for the lost, and pitching in to help clean the church building or whatever needs done.  Their prayer for him is that he would continue to serve the Lord with all his heart, mind, soul and strength. Joshua is currently at Heartland Baptist Bible College in the United States, studying to be a pastor.